VICE News: A 17-Year-Old Aspiring Cop Has Been Charged With Murder In Kenosha

A 17-year-old aspiring cop has been arrested and charged with first-degree murder for his alleged role in a shooting during a protest in Kenosha, Wisconsin, on Tuesday night that left two dead and one injured.

The suspect was identified as Kyle Rittenhouse, of Lake County, Illinois. Prosecutors in Lake County filed the charges at noon Wednesday, and labelled him a fugitive who “fled the state of Wisconsin with intent to avoid prosecution for that offense.”

The police were practically aiding and abetting him:

Police interacted with the alleged gunman at various locations in Kenosha throughout the night. In one video, Rittenhouse is seen chatting with police who gave him a bottle of water and thanked him for being there.

Here’s the video, which shows Rittenhouse walking with the police, and the police handing out water to armed vigilantes:

There’s more in this story from The Journal Times: Police in Kenosha shared water, said they ‘appreciate’ armed group before two killed. 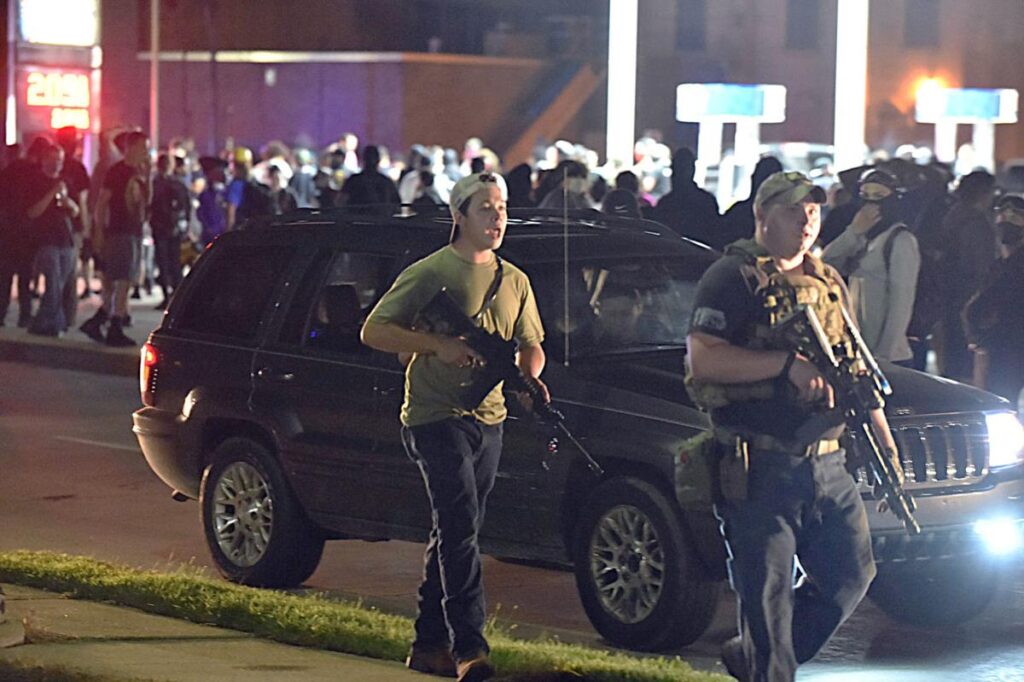 Not long before Kyle Rittenhouse, a 17-year-old from Illinois who was with a self-described “local militia” throughout Tuesday night’s deadly protests, allegedly killed two people and injured a third with gunfire, video shows law enforcement giving Rittenhouse water and telling his group “We appreciate you guys, we really do.”

Later in that article:

Another video shows a person with the group saying that, earlier in the night, police had told them “We’re going to push them by you so you can deal with them.”

Here, a militia member says cops told them they would “push” the protestors towards them because they knew they could handle them. pic.twitter.com/S6lzmJfOJe

Here’s another video with Rittenhouse prior to his shooting and killing two people, identifying himself as “local militia” despite having come from not just out of town, but out of state:

Here’s a video of Rittenhouse in an interview with The Daily Caller’s Richie McGinnis, prior to the shooting:

I interviewed the alleged shooter before the violence started.

If you thought I was engaging in hyperbole when I wrote earlier that the police were “aiding and abetting” Rittenhouse, you need to see the following: 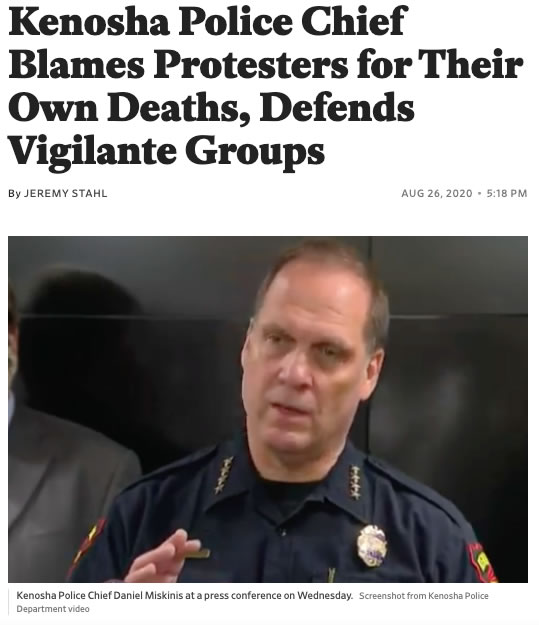 “Persons who were out after the curfew became engaged in some type of disturbance, and persons were shot. Everybody involved was out after the curfew. I’m not going to make a great deal of that, but the point is the curfew is in place to protect. Had persons not been out involved in violation of that, perhaps the situation that unfolded would not have happened.”

You need to remember that the protests are taking place because an office under his charge shot Jacob Blake seven times in the back as his children watched.

The following is taken from the Milwaukee Journal Sentinel article titled What we know about the victims of the Kenosha protest shooting that killed two men and injured another:

This is #AnthonyHuber, one of the victims from last night’s shootings. His loved one tells us he was a super talented skater and shared this video with us. They’re honoring his memory by asking everyone to please come to Basik skate park to pay respects. #SkateForHuber #Kenosha pic.twitter.com/a5WGWGQJhL

Friends described Huber as a happy and laid-back guy who loved to skateboard.

“He was always a really sweet person. Always had a smile on his face,” said Max Seebeck, who grew up skateboarding with Huber in Kenosha.

Tim Kramer, 26, said he had known Huber since they were students at Lincoln Middle School in Kenosha.

“He was always really friendly. He got along with everybody. He was a class-clown-type of guy. He loved skateboarding. It’s been a big part of his life.”

Kramer said he had not seen Huber in recent years but remembered him as having a gentle nature.

One Facebook account said Huber was running at Kyle Rittenhouse, the teen accused in the killings, with his skateboard when he was shot.

“I heard he was trying to save somebody from being shot,” said Seebeck.

According to social media posts from friends and family, Rosenbaum is a Texas native. He moved to Kenosha within the last year.

Rosenbaum was shot in the head, a friend said.

He leaves behind a fiancée and a young daughter.

Grosskreutz was shot in the arm and is expected to survive.

Grosskreutz was in Kenosha on Tuesday with the Milwaukee-based social justice group the People’s Revolution Movement, spokeswoman Bethany Crevensten said.

She said Grosskreutz was recuperating in a local hospital and was not available to speak.

She said the entire group of about 25 protesters was attacked Tuesday. She said their tires were slashed and Kenosha officials towed them, so owners were left stranded in the city.

Grosskreutz had volunteered as a medic at Black Lives Matter protests across Milwaukee this summer, according to WTMJ-TV.

The shooter: He seems nice

And OF COURSE he was front row at a Trump rally…

A spokesperson was quick to make the standard statement: “This individual had nothing to do with our campaign.”

In Rittenhouse’s favor is the fact that he’s a big Trump fan — big enough that he might get a pardon.

The terrible people rushing to his defense

It didn’t take long for the host of the Frozen Dinner Heir White Power Hour, sensing a kindred spirit, to side with the little turd:

(By the way, it’s true: Tucker Swanson McNear Carlson’s stepmother is Patricia Caroline Swanson, who is an heiress to Swanson Enterprises, as in the company that makes “Hungry Man” frozen dinners.)

In an attempt to be worse than Tucker, if such a thing is possible, Ann Coulter tweeted that she wanted Rittenhouse as her president.

You’re leaving out some key facts:

1. Grosskreutz was also illegally in possession of a firearm, and was pointing a pistol straight at Rittlebaum’s head when he was shot. We have photos to prove this. Ie: it was self defense.
2. Rosenbaum had just whacked Rittenhouse in the head with a skateboard, ie, assaulted him with a deadly weapon/attempted murder, Ie, it was self defense. All this is also on video.

All parties belonged to or aligned with extreme political groups. All sides acted foolishly. All were looking for trouble. All found it.

But deifying the rioters whilst demonizing Rittenbaum is juvenile and irresponsible.

It’s a developing story, and I’ll add it to as I find out. Keep in mind that I’m not a full news agency, but a solo blogger. I will attempt to be fair.

Here’s a question worth considering: Which is more extreme: