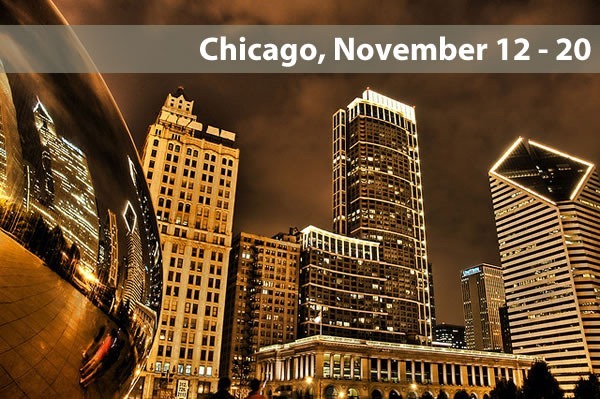 Creative Commons photo by Trey Ratcliff. Cllck the photo to see it on its Flickr page.

I’ll be in Chicago from Saturday, November 12th through Sunday, November 20th. It’s part birthday present to myself, part taking advantage of a deal on travel and hotel, part “Hey, I’m mobile and can work from anywhere, right?”, part chance to visit some clients and developers based in the Windy City, and there may or may not be a girl involved.

If you have any suggestions as to what I should see, recommendations for places to eat that truly say “Chicago” or want to catch up during the weekdays, let me know (and that goes double for you, Robertson J. Strickler). Feel free to post your suggestions and recommendations in the comments. 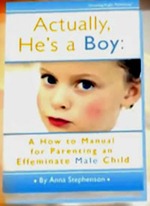 The Onion News Network’s fake morning talk show, Today Now!, has a high-larious segment that helps parents of “overly feminine little boys” take the “difficult problem” of choosing the right Hallowe’en costume. It features Anna Stephenson, author of Actually, He’s a Boy: A How-to Manual for Parenting an Effeminate Child, who shows concerned parents that “with a little creativity, we can disguise your girly son as a normal kid.” It’s an inspired and seasonally appropriate example of cringe comedy.

A couple of people I know, while enjoying the clip, did remark that there is a sad part to the piece: the people it’s targeting will probably take it seriously. There’s always that risk with satire, especially in this day and age. 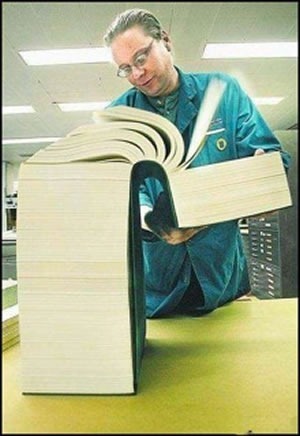 Gonna be a lot of reading…

Yesterday’s post about Accordion City’s Peter Griffin-esque mayor, Rob Ford, hit 20,000 pageviews and climbing thanks to a link from BoingBoing, the long-time 800-pound gorilla of the blogosphere. Thanks to my friend and former coworker Cory Doctorow for the link!

Yesterday’s post also introduced a lot of people, most of whom live outside Canada, to Mary Walsh’s character-within-a-character on the current events satire program This Hour Has 22 Minutes, Marg Delahunty playing Marg: Princess Warrior.

The CBC were quick to note that the Rob Ford 911 incident has put the Marg: Princess Warrior character in the spotlight, and they’ve assembled a montage of Marg’s greatest hits, which you can see in the video above. In it, you’ll see her quick-hit interviews with a number of Canadian politicians and one hockey commentator: Jean Chretien, Stephen Harper, Stephane Dion, Lucien Bouchard, Joe Clark, Ralph Klein, Don Cherry and Paul Martin. 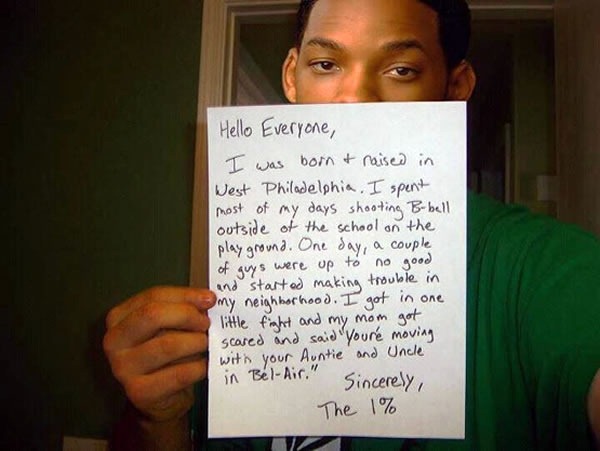 Is the photo authentic? Probably not, and who cares?

And here’s the Canadian homage to Fresh Prince:

Those of you not familiar with Accordion City’s politics may not have heard our mayor, Rob Ford, who’s best summed up as a voting experiment gone terribly, terribly wrong. Riding in on a Tea Party-esque campaign based on the single issue of cutting costs and voted in mostly by the suburbs as a right-of-centre reaction to the previous left-of-centre mayor David Miller, he’s been taking a richly-deserved beating in the opinion polls for his toxic combination of a pig-headed inability to compromise, willful ignorance of reality and a lack of tact second only to the cartoon character Peter Griffin. It is this last quality (along with the characteristics of his mayoral rivals) that led me to compare the players in Toronto’s last mayoral election to the characters in Family Guy.

The Toronto alt-weekly paper formerly known as Eye Weekly (they’re now The Grid) did a pretty good job of summarizing what the city would be like under “Mayor Griffin”, and one year later, it seems mostly spot-on:

Wait, you say the mayoral frontrunner is an uncouth, simple-minded loudmouth with a notoriously bad temper and a penchant for saying absolutely the wrong thing? And he wants to rip up streetcar tracks, slash city spending and dismantle service infrastructure? And to top it all off, he has a demonstrated inability to get anyone on council to work with him? Where do we sign up? Seriously, though: the best-case scenario with Ford is that he can’t accomplish anything. Worst-case, he ruins the city entirely.

The only thing that this article missed is that Ford would be pure comedy gold.

This Hour Has 22 Minutes is a Canadian television “fake news” show in the spirit of SNL’s Weekend Update, the BBC’s Not the Nine O’ Clock News, The Daily Show and The Colbert Report. One of their long-running segments is Marg: Princess Warrior, which features castmember Mary Walsh’s east-coast housewife character Marg Delahunty dressing up in a Xena: Warrior Princess-like outfit and surprise-interviewing Canadian politicians. 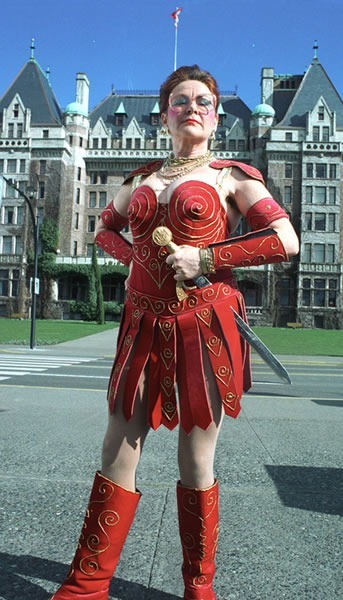 The Marg: Princess Warrior interviews are the stuff of legend in Canadian political circles, and even the most humour-impaired of politicians have angled to get ambushed by her simply because she’s good publicity – at least with that part of the Canadian public that likes the CBC. The CBC is unpopular with Canadian conservatives for the same reason that PBS and NPR are unpopular with their American counterparts: publicly funded, not pandering to the lowest common denominator, (mostly) smart and trying to pass on some smarts to the audience. With the notable exception of Hockey Night in Canada, Rob isn’t likely to watch the CBC and isn’t likely to have seen This Hour Has 22 Minutes nor the Marg: Princess Warrior segments. So he can be excused for being a bit concerned when he got a surprise interview from them earlier this week.

On Monday morning, a This Hour Has 22 Minutes crew, along with Mary Walsh in her full Marg: Princess Warrior outfit showed up at the end of Rob Ford’s driveway to do the interview. Ford is reported to have gone along with it at the beginning, but either sensing that he might become the object of ridicule or getting confused because things were happening more quickly than he could process, got huffy, ran inside his house and called 911, which is what we’ve all been taught to do in the case of a life-threatening emergency. And what’s more life-threatening to a socio-politico-fiscal conservative than the CBC?

Your Worship (yes, that’s how formally address the mayor in Toronto, even if he’s Rob Ford), if the sight of a middle-aged woman in costume sends you running for the cops, you’re really not going to like this little celebration that’s happening this weekend called Hallowe’en: 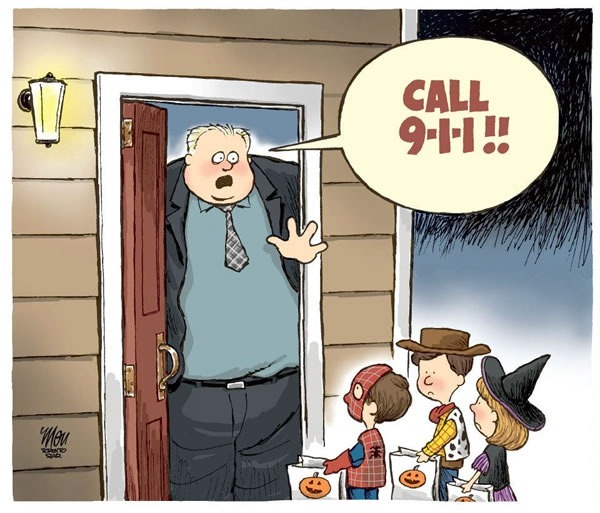 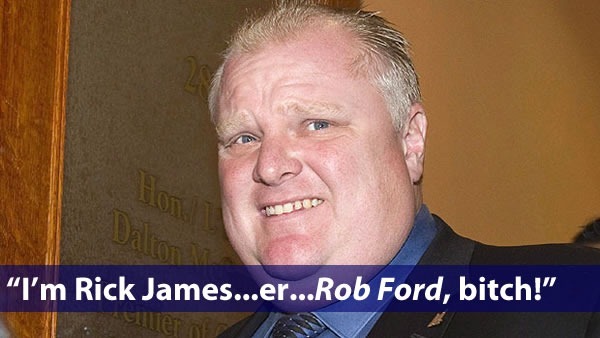 The only thing of greater comedic value than the fact that Rob Ford placed a 911 call in response to a camera crew and a woman dressed up like Xena is what he’s alleged to have done during said call. When he didn’t get the kind of response he was hoping for – Two police cruisers arriving within seconds? An entire anti-CBC SWAT team? The Christian Bale version of Batman? – he is said to have cussed out the dispatcher:

“You bitches! Don’t you fucking know? I’m Rob fucking Ford, the mayor of this city!”

This isn’t the first outburst of this type to emanate from His Worship. A few years back, Ford got into an altercation with fellow fans at a Leafs/Sens game after they asked him to dial down his obnoxiousness. He responded with “Who the fuck do you think you are? Are some kind of right wing Commie bastard [sic]? Do you want your little wife to go over to Iran and get raped and shot?”

The news reports say recordings of this call have “spread like wildfire through the police service”. If real, this recording may become as legendary as this complaint call to the Quebec-based cable-and-internet provider Videotron [576KB MP3, swearing in French], which is the perfect tutorial for swearing in Quebecois French.

This story’s been getting a lot of play in the local media. Even the right-leaning National Post have been wavering in their “ideology first, things like actions, character and ideas can wait” support for Ford as of late, and even more so in light of this latest gaffe. (They still scold the CBC in the article, because hey, they’re the CBC. Scolding them is what the Post does.)

What now remains to be seen is how Team Ford handles the situation. In the meantime, it looks as though Team Photoshop is going to have a field day: 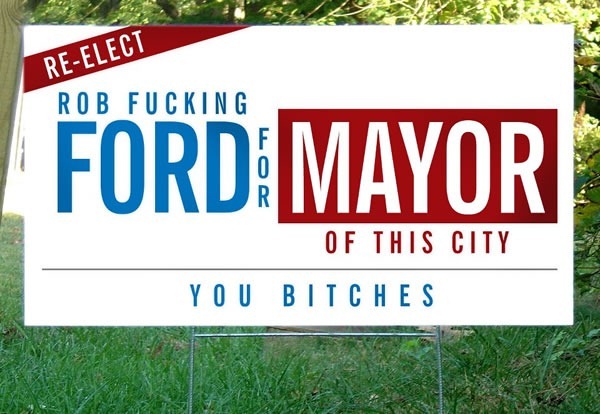 I’m going to Chicago in a couple of weeks, so this might come in handy: 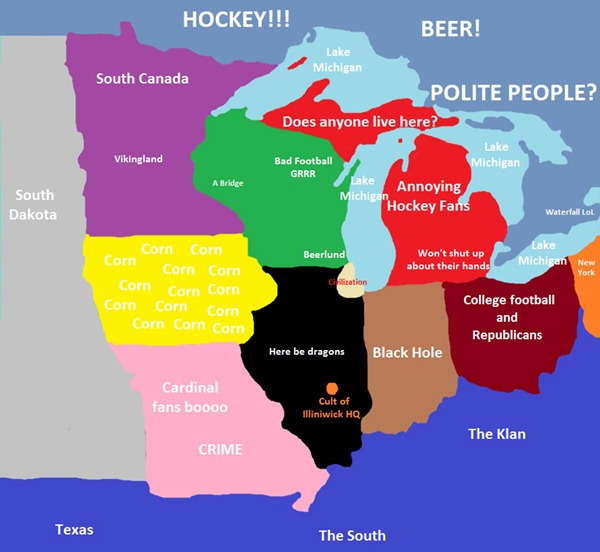 Click the map to see it at full size.