Someday, perhaps a decade from now, when we’re all looking back at how far the Tampa Bay area has come, we’ll look back and remark at the key role that Café con Tampa played. Every Friday from 8:00 a.m. to 9:00 a.m. in the Oxford Exchange’s Commerce Club, Tampa’s most active, engaged, involved, and well-dressed citizens gather to hear important topics given by interesting speakers while enjoying a delicious breakfast in beautiful surroundings.

It’s been a while since I’ve had a chance to attend Café con Tampa, as work and my speaking and conference schedule have kept me busy. This was the first one I’d been able to attend in weeks. It was good to be back.

Traffic and a shortage of parking spaces (there’s a lot of construction around Oxford Exchange) meant that I missed the first twenty minutes of Gillum’s appearance. As I entered and paid my admission — $12 well spent, in my opinion — I was told “You’re in time for Q&A…the best part!”

I walked in just in time to catch a rather aggrieved older gentleman asking where Gillum got the notion that the law preventing former felons from voting even though they have served their time in prison is a relic from the days of Jim Crow. Gillum, who’s probably no stranger to this sort of question, explained the true intent of this kind of voter disenfranchisement with great aplomb and considerable charm.

Among the other topics discussed were:

Near the end of his session, Gillum talked about the traditional greeting of the Masai people of southern Kenya and northern Tanzania: Kasserian engeri?, which translates as “And how are the children?” He pointed out how that greeting underscores the high value that the Masai assigned to the well-being of children, and how much better we all could be if we adopted the same attitude.

As with most Café con Tampa gatherings, there were more questions than time for them. The questions continued in the atrium, with Gillum surrounded by all manner of recording devices:

I went down to the atrium to hear the questions they were asking Gillum, and in the process met with two gentlemen from St. Petersburg’s ACT (Arts Conservatory for Teens): Herbert Murphy and Alex Harris, who spoke at Café con Tampa a couple of weeks ago. They saw the accordion — which I bring to events like this because it starts conversations — and we got into a great conversation about music, technology, and where the two intersect. Herbert and I even talked about having me do a presentation with their students, and I’d be more than happy to take them up on that offer. If you want to meet interesting people in Tampa Bay, and possibly collaborate with them and start something potentially great, you should check out Café con Tampa. 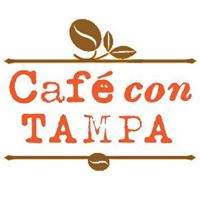 Café con Tampa is a weekly gathering where people interested in the issues that affect Tampa Bay and the world beyond meet to learn and share ideas with interesting, entertaining (and sometimes infuriating) guest speakers. It takes place every Friday between 8:00 and 9:00 a.m. in the wonderful setting of Oxford Exchange, a combination of restaurant, book store, gift shop, co-working space, design studio, event venue, and one of the best “third places” I’ve ever set foot in. It’s attended by an interesting audience that’s often a mix of movers and shakers from the worlds of arts, business, academia, and government, and put together by local heroes Del Acosta and Bill Carlson, President of the communciations agency Tucker/Hall. Admission is $12.00, and it not only lets you into the event, but also gets you Oxford Exchange’s delicious breakfast spread. If you want to see interesting presentations and have great conversations with some of the area’s movers, shakers, and idea-makers — myself included — you should attend Café con Tampa!

Here are Café con Tampa presentations that I’ve written about: