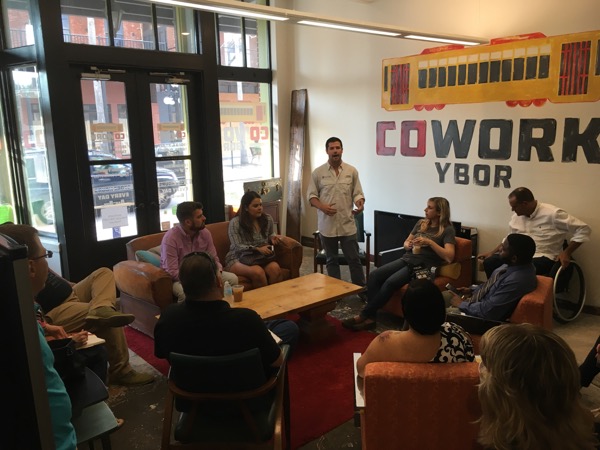 Yesterday, a new and potentially scene-changing Tampa Meetup group convened for the first time: the Tampa Company Culture Meetup, which I attended with Anitra and our friend Shelley.

Organized by Saxon Baum and Taylor Wallace, co-founders of the startup WeVue, it’s a gathering of Accordion Bay people who are interested in building good cultures in the companies where they work. I attended the meetup and “worked the room”; I found that the attendees by and large were the sort of folks who actively involve themselves in their companies and communities. Among the crowd were local Agile community leaders Jessica Wolfe and Ed Martin, as well as Tampa Bay WaVE entrepreneur-in-residence and all-round super-mentor Kenneth Ervin Young. 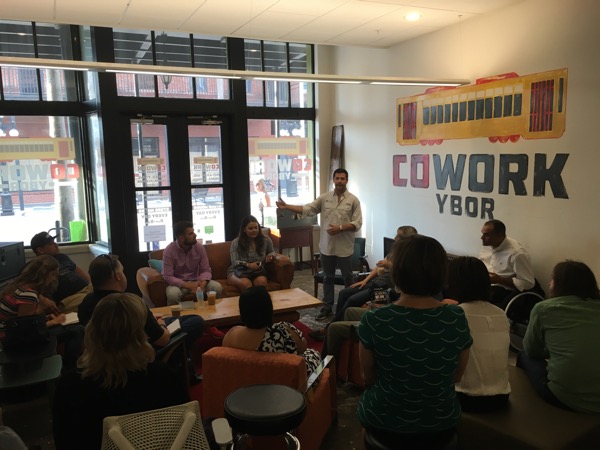 The event took place at CoWork Ybor, a coworking space attached to the Blind Tiger Café (which itself is a cafe attached to a clothing store) located in Ybor City, a historic warehouse neighborhood turned entertainment district. Not coincidentally, the meetup’s featured speaker was Roberto Torres, CEO of the Blind Tiger Cafe, CoWork Ybor, and Black and Denim, and he gave an informal talk on how he came to understand that company culture can help drive business success.

Roberto started by talking about his start in the business world as an accountant. “It’s not creative work,” he said, “In accounting, if you get creative, you go to jail.” He said that accounting burns out a lot of people, citing its high rate of churn, especially in the area of auditing. A lot of it has to do with the fact that as an auditor, you’re often seen as an “angel of death”, who “inflicts pain” and whom “everyone detests”.

His first exposure to the power of company culture to transform the work experience was when he worked for a company that imported its business culture from its parent company in the Netherlands. That firm took a greater interest in employee well-being by taking pains to create a comfortable work environment and sense of belonging, foster mentoring, a sense of community, and work-life balance within the organization, and provide perks like free food.

He also learned from Zappos’ “company culture tour” (which I took during my days at Microsoft; it’s worth taking, and a refreshing change from the rest of Las Vegas), where he saw their “wild and crazy” day-to-day operations first hand, and saw how employees who were truly engaged with a company produce more, contribute more, and even provide their company with some of its best ideas. He took that concept and ran with it at Blind Tiger; “For instance, half of our menu is employee-suggested.” 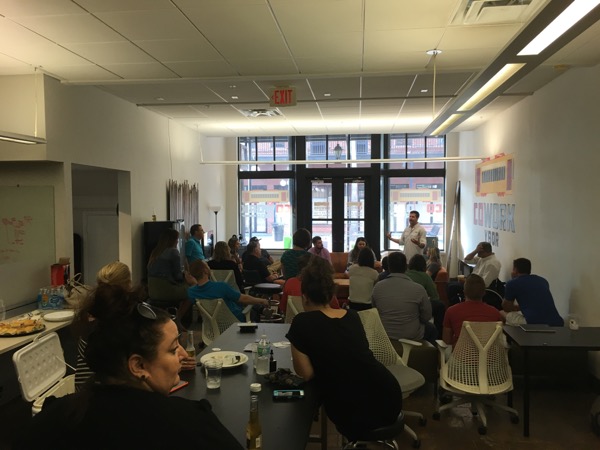 Roberto said that the company culture at Blind Tiger has three rules:

“When customers come in, they’re coming in to fulfill a basic Maslow need. They’re thirsty, they’re hungry,” ha said. Blind Tiger’s employees fill that need at first, but then establish connections with the customers to fulfill needs higher up on the hierarchy. The goal is to surpass people’s expectations, which is a tricky one — he cited the quote “expectations are premeditated resentments”. 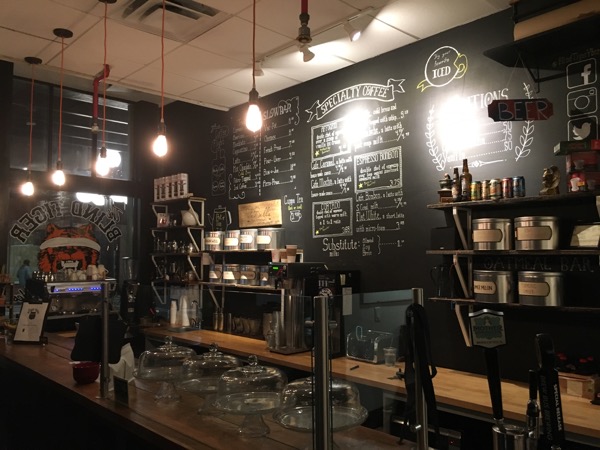 In order to have employees who are fully engaged, he uses a number of approaches:

He takes a strong interest in the well-being of his employees, as his concern is to “make companies that aren’t just stepping stones, but chapters in someone’s life.” To that end, he tries to make the work experience at Blind Tiger a great one, expose his crew to different activities and positive experiences, bring healthy food to team meetings, and encourage them to do those little things that make life better (“I do tell them to get 8 hours of sleep”).

As for his involvement in the running of Blind Tiger, Roberto says that he’s not involved in the day-to-day operations, but provides direction. He’s got a manager and assistant manager to take on those tasks, but he says “I wash dishes”.

The meetup ended with a round-the-room session where everyone introduced themselves, telling us what they did for work and what they’d like to see at future Company Culture meetups, followed by more informal socializing.

Keep an eye on the Tampa Company Culture Meetup page — I’ve got a hunch that this will be an active and interesting group. My thanks to Saxon, Taylor, and Roberto for making it happen!

One reply on “Notes from the first Tampa Company Culture meetup”