This certainly isn’t all that’s going on this week, but this is all the after-work stuff that I’ll be up to… 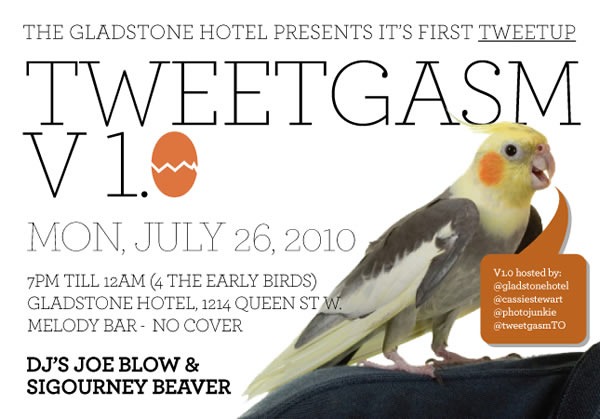 The folks at the Gladstone Hotel are launching Tweetgasm, a monthly series of Tweetups at the Melody Bar where everyone’s invited to “dance, drink, eat and meet”. The event will be hosted by the following local Twitter personalities:

It’s at the Melody Bar in the Gladstone Hotel, 1214 Queen Street West (just east of Dufferin/Gladstone) on Monday, July 26th and runs from 7:00 p.m. to midnight. 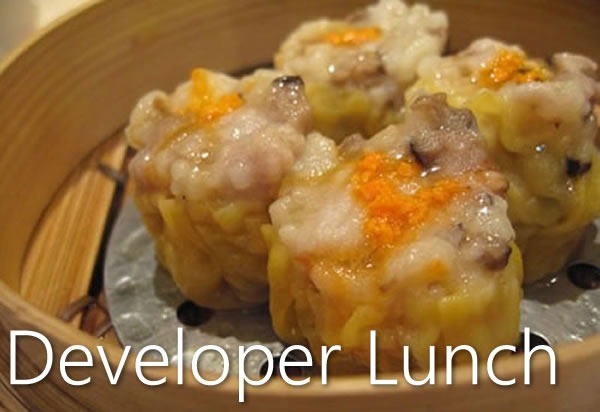 Every now and again, local software development guy with a videocamera Kristan “Krispy” Uccello calls a gathering of Toronto’s programmers for a nice dim sum lunch. That’s the Developer Lunch, and there’s one happening on Tuesday!

It’s at Sky Dragon Restaurant, top floor of the Dragon City Mall, SW corner of Dundas and Spadina, on Tuesday, July 27th and runs from 12:00 noon to about 1:30 p.m.. 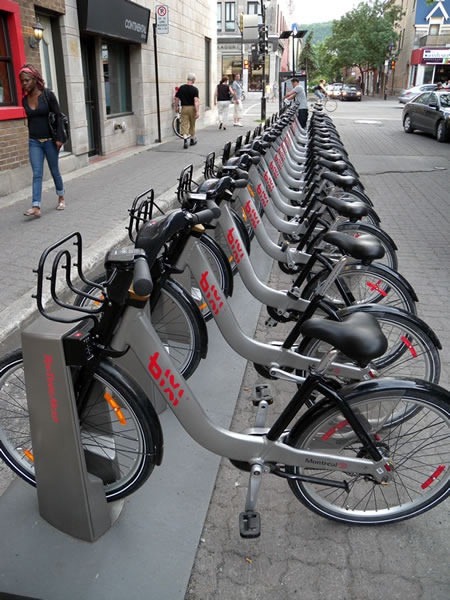 When I was in Montreal earlier this summer, I took Montreal’s BIXI bike system for a spin and loved it. I also noted that BIXI was coming to Toronto, and it’s happening at last. What better way to mark the event with a party: the BIXI bash? There’ll be free food and entertainment, as well as a chance to take a BIXI bike for a spin (having ridden one myself, I can report that they’re great city bikes).

After a little dinner engagement, the Ginger Ninja and I will probably make our way down to Tequila Sunrise to catch the weekly Loser Karaoke event. Loser Karaoke isn’t about being the best singer, it’s about wanting to sing in front of a friendly and appreciative crowd. Loser Karaoke is also a regular gathering of Toronto’s social media and web development crowd, so if you’re looking for work or networking opportunities, you might want to drop by.

It’s at Tequila Sunrise, 212 Adelaide Street West, just west of University), on Thursday, July 29th and runs from about 10:00 p.m. until they close the joint.

The Ginger Ninja and I are spending the long weekend in Boston and parts surrounding, and we want to catch up with our friends in the area! So we’re declaring a gathering at our favourite Harvard Square hangout and inviting whoever wants to catch up with us for a drink, dinner, conversation or impromptu accordion performance. 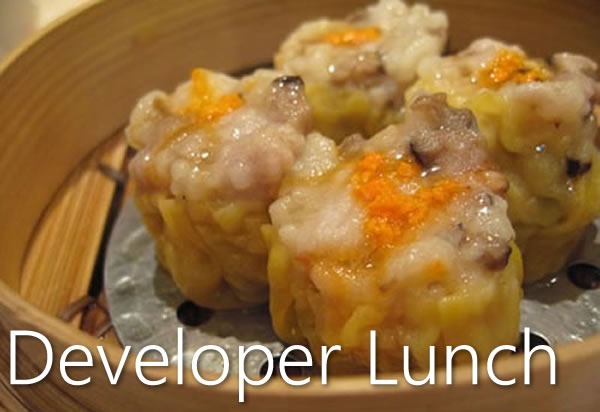 Once again, Kristan “Krispy” Uccello has declared another Toronto developer dim sum lunch! It’s at the usual place – Sky Dragon, located on the top floor of Dragon City mall (corner of Spadina and Dundas) tomorrow (Friday, May 14th, that is) at noon.

I’m trying to boost the .NET geek quotient at these lunches – it can’t just be me, Mark Cidade, Reg “Raganwald” Braithwaite (he’s developed with just about everything under the sun) and David Crow! If you’re in the area, come on down and have some cheap, delicious dim sum. We split the bill at the end, and it typically runs about $11 – 12 a person. Whether you’re part of the local tech community or a visitor from out of town who’s come in for the FutureRuby conference, you’re invited to the Developer Lunch taking place today at noon at Sky Dragon restaurant in Dragon City Mall.

This is going to be the 14th developer lunch organized by local developer and video-chronicler of local geekdom, Kristan “Krispy” Uccello. They’re not formal at all – there’s no agenda, set discussion topic or presentations – it’s just people who like writing software or who aspire to write software getting together to enjoy a nice dim sum lunch.

The lunch takes place at Sky Dragon restaurant, which is at the top floor of Dragon City shopping mall, which in turn is at the southwest corner of Dundas and Spadina. If you’re a FutureRuby attendee from out of town, that’s a five-minute walk from the conference hotel.

For those of you not familiar with Chinatown, here’s what Dragon City Mall looks like: 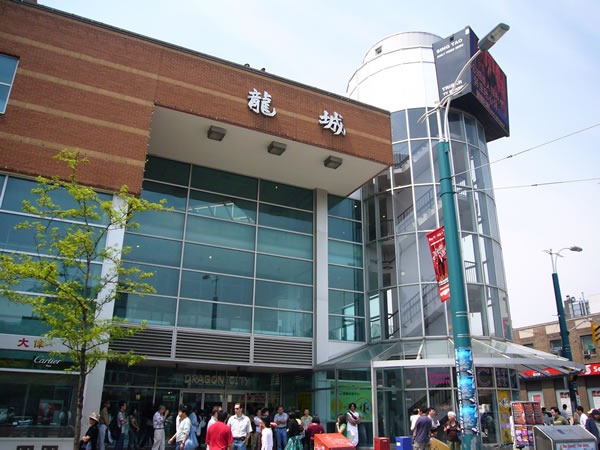 Use the elevator or stairs in the circular tower part of the building to go to the mall’s top floor, which is where the restaurant is located. We expect that we’ll be a big crowd, so they might put us in one of the private rooms in the back – if you don’t see a bunch of geeks in the restaurant, ask the waitstaff for the large group of computer programmers and they’ll lead you to us.

It’s dim sum, which means the food will be tasty, cheap and plentiful. Everybody pitches in equally towards the final bill and it’s typically $12/person including tip.

See you at noon!

This article originally appeared in Coffee and Code. 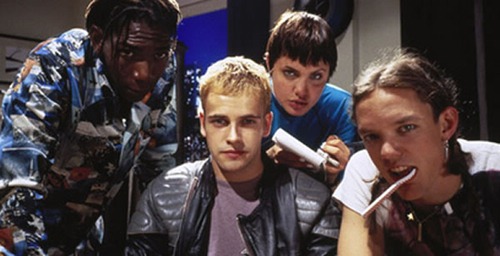 It’s not the only geeky get-together in Toronto today: 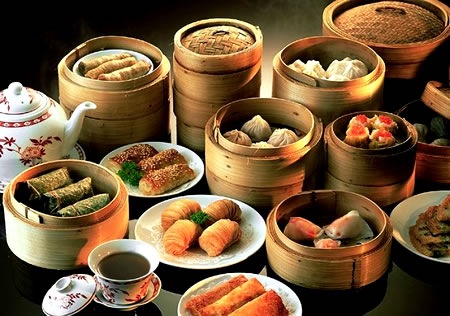 Once again, it’s time for another Developer Lunch here in Accordion City! This is going to be the ninth in the series of lunches organized by Kristan "Krispy" Uccello, and it will be held at the usual location, Sky Dragon restaurant (on the 5th floor of Dragon City mall at the corner of Spadina and Dundas).

These lunches give Toronto-area developers and other techie types to get together for some delicious dim sum and conversation. I’ve been to several of these, and they’ve always been fun. The bill gets split on a per-table basis, and it’s typically worked out to about $12 a person, and everyone leaves full.

If you’re a developer – and that means anyone who practices or is interested in programming – you should come on over to Sky Dragon and join us for lunch! I’ll be there, and you’ can ask me about anything, whether it’s development, Microsoft, accordions, whatever!

The Developer Lunch takes place today (Tuesday, January 27th) at noon and runs until about 1:30 p.m.. Just look for the tables with the geeks!