Here’s an unsurprising response to the image above, which shows a more-accurate depiction of Jesus on the left, and the barista who works the evening shift at the Starbucks in Swede Hollow, Minnesota on the right:

When you see God as white, and people as being made in God’s image, it’s no surprise that non-whites are seen as a little less human, and it’s how you get ministers like Mike Huckabee.

Mike Huckabee, the former governor of Arkansas, political commentator on his own show, and combination Fox News contributor and Southern Baptist minister (which should not come as a surprise), posted the tweet above yesterday.

As the Arkansas Times noted, he chose Christianity’s most important holiday to post a racist gibe. Attacks against Asians are on the rise, and Huckabee’s greatest concern is that people he thinks of as lesser and not American are getting treated like equals and Americans.

Thankfully, a number of people have called him out, including Representative Ted Lieu of California’s 33rd congressional district in this tweet that captures my sentiments perfectly:

The odds that Huckabee will listen to Ted Lieu are pretty low. He did get called out by someone he does listen to — author and evangelist Beth Moore:

His response was to deny he did anything bad, which is the first step of the DARVO tactic — Deny. I expect to see the remaining phases, Attack and Reverse Victim and Offender soon enough:

At a time when anti-Asian attacks are on the rise…

…Huckabee’s statement shows his annoyance at a group of non-whites getting special attention because violence is being directed at them.

Some more context if you need it:

Huckabee’s complaints about Coke, Delta, and Major League Baseball are about their opposition to Georgia’s voting law, which appears to be designed to suppress voter participation, especially among minorities. Even the act of giving water to voters in line is now illegal in that state.

All of this was in response to results from the recent election, when Georgia, for the first time in a very long time, voted Democratic in both the presidential and senate elections. The new law is an attempt to make sure that such a thing never happens again, and thus preserve minority rule — a oligarchy of upper-class white people.

Back in 2015, a couple of weeks before marrying an American, I wrote:

In less than a fortnight, I’m marrying an American. As the husband of a U.S. citizen, I would be eligible for a green card, and eventually, citizenship. I’m also the direct descendant of a U.S. citizen, but I’m told it’s easier to get it via my wife rather than my great-grandfather, James O’Hara. One option is to stay here in the subtropical climes of Accordion Bay, which may mean that someday, I might apply for citizenship.

I come here bearing goodwill, skills in the areas of technology, writing, and rock and roll accordion, cultural and language skills that surpass those of many of the locals (it’s Florida, man!), and a jacket (pictured) that cannot possible be any more American than it already is. I have what it takes to be American. But the question lingers in my mind: will Americans ever consider me to be one of them?

It would appear that the answer is: “Not yet.”

The Violence Against Women Act (VAWA) was signed into law back in 1994. Since then, it’s awarded over $8 billion in grants to state and local governments and organizations so that they could develop initiatives, programs, and services to protect and support women who are undergoing or who have survived sexual assault, domestic violence, and stalking.

The law expired in February 2019, and until then, reauthorizing it was a formality. Then it changed.

H.R. 1585, also known as the Violence Against Women Reauthorization Act of 2019, had a provision to close the “Boyfriend Loophole”. Simply put, this loophole limited the ability of people convicted of abusing or stalking a non-spouse partner to get firearms. Previous versions of the Act applied this limit to abusers who’d lived with or had a child with the victim. (Despite what people will tell you, Christianity isn’t the majority religion here in the U.S.; it’s gun worship.)

The Act passed a vote in the House of Representatives (263–158), but got stalled in the Senate. The National Rifle Association (as I said: gun worship) warned Republicans that voting for it would affect their ratings (Yes, in a nightmare version of Yelp, they rate politicians, and provide them with campaign funds. Again, I say: gun worship.) One NRA spokesghoul described it as “a smokescreen for its real goal—banning firearms ownership”. Because of their actions, VAWA hasn’t been reauthorized since 2019 — until now.

A day after the Atlanta spa shootings (which I’ll write about later), the House of Representatives voted 244-172 to pass VAWA. That’s right, this time even more Republicans — 172 in total — voted to oppose the Violence Against Women Act.

At the 2021 Conservative Political Action Conference (CPAC) that recently took place in Orlando, Majorie Taylor Greene, a.k.a. “the QAnon Congresswoman”, had this to say about foreign aid:

“We believe our hard-earned tax dollars should just go for America, not for what? China, Russia, Middle East, Guam, whatever, wherever.”

Let me repeat that, in case it’s news to you. Guam is part of the U.S..

Here’s a video that should give you an idea of what it’s like in Guam:

Since 1898 and with only one interruption — about three years during World War II, when it was occupied by Japan — the U.S. has been in control of Guam. It’s a U.S. territory, with status similr to that of Puerto Rico.

You’d think that someone who ran as a MAGA candidate might remember that time in 2017 when North Korea’s leader Kim Jong Un threatened to attack Guam and Trump famously called Guam’s governor to reassure him:

(While the call was meant to provide peace of mind, we would all learn much later how very much the opposite is true when Trump says “We’re going to do a great job, don’t worry about a thing.”)

In fact, Guam is home to one of the biggest U.S. weapons stockpiles, which supplies U.S. forces operating in the Eastern Hemisphere. As Politico put it, there was a reason for Kim to put Guam in his sights:

If Kim can credibly threaten Guam, he threatens the United States’ ability to fight all but a short war on the Korean Peninsula—not to mention the U.S.’s ability to fight another major war elsewhere. As threats go, this one is surprisingly precise, credible and strategic.

What else does the Kooky QAnon Congresswoman think or believe?

If you think that Marjorie Taylor Greene’s ignorance about Guam is cause for concern, you might not be ready for what she believes, thinks, or says:

Territories of the U.S.: A refresher course 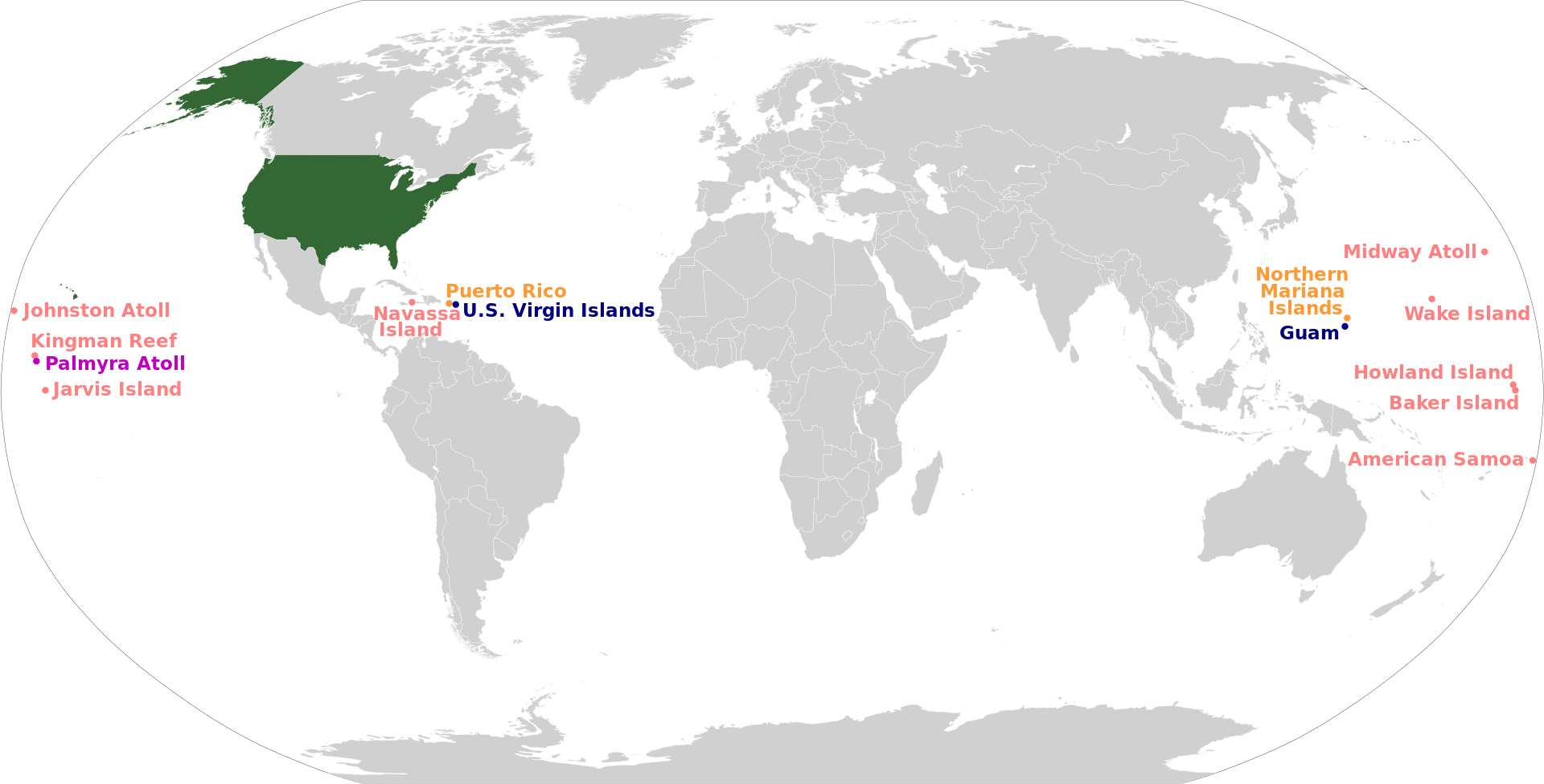 The United States has five territories with permanent populations, and they’re all in the tropics:

In what seems to be an attempt to justify the Norwegians’ use of “Texas” as a slang expression for “crazy”, Texas’ governor, Greg Abbott, has lifted the state’s mask mandate and will allow businesses to open their doors at 100% capacity starting March 10th, in spite of health experts’ warnings.

There’s a point in a lot of dystopian science fiction where the interests of business take precedence over the interests of people’s safety, and well, Texas is just about there. Florida’s governor, Ron “DipShantis” DeSantis is likely watching and working on plans to follow suit, based on his recent statements. Welcome to late stage capitalism!

It’s going to get dumber, folks.

By the bye, if you’re wondering where the image above comes from, it’s from this classic scene from the 1979 film Alien:

October 3, 2016: It’s my first day at the job as the developer evangelist for an RFID company with an office in Asheville, North Carolina, so I’m flying there for my first face-to-face with my new boss.

I’m deep in thought, going over what I’m going to talk about with my boss during dinner, when my train of thought gets interrupted.

Someone’s yelling at me.

I look over to see if the yelling is actually directed at me, and not just someone else nearby. I look.

The yelling came from the end of the line at Carolina Pit BBQ. It’s coming from a guy with sandy brown hair, plaid shirt, mom jeans, and one of those then-new “Make America Great Again” caps. He looks more basic and dead inside than a Bob Evans menu, and more “economically anxious” than a first-timer at a Vegas poker game who’s realizing that every other player at the table is a shark or shill.

It’s clear to him that I didn’t quite hear him the first time, so he repeats himself.

“I said: You with the big backpack! Go back to China!”

He’s mistaken my accordion for a backpack, and me for Chinese.

“I bet you heard this time, chink!”

From both my media training and my hobby as a street musician on the streets of downtown Toronto, I learned a couple of tricks for dealing with insults from passers-by and hecklers. One of them is to approach them and ask them to repeat what they just said and explain what they meant by it. This is effective if there’s a crowd around and you think they might be more sympathetic to you.

“Would you mind repeating that?” I ask loudly and clearly using my radio announcer voice, as I approach, taking strides as if I were a club bouncer in “business mode”.

As I get closer, it becomes more apparent that I’m almost a head taller than he is. Also, with the accordion slung on my back, my shoulders appear even wider. He’s getting an object lesson that the stereotype of Asian men being short and meek doesn’t always apply.

“Did you not hear me?” I ask. My “scratch a bully, find a coward” gamble is paying off.

I’m now five or six strides away and closing in fast. I repeat my question: “Would you mind —”

And that’s when the little shit high-tailed out of the line, straight for the departure gates.

I look at the spot he just vacated and take it.

(The full version of Passover song Dayenu — which translates as “It would have been enough” — is fifteen stanzas.)