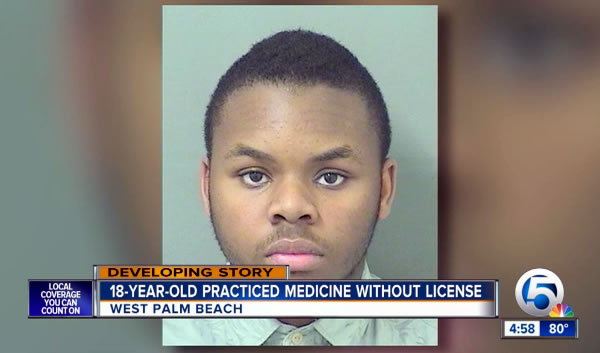 Most “Florida Man” stories don’t feature someone with this much ambition: 18-year-old Malachi Love-Robinson of Palm Beach, Florida was arrested for practicing medicine without a license — convincingly enough to somehow hang his shingle in a medical office building and see patients. I assembled the video below from a number of reports filed by the news crew at KTLA 5, a local news show:

His Facebook page doesn’t exist anymore, but here’s a screen capture. As you can see, Love-Robinson went by “Dr. Love” on the page, which would be my runner-up choice if I had to use a fake doctor name. “Dr. Feelgood” is still my first choice:

While Love-Robinson should face the consequences for his actions, I think that simply locking him away would be a waste of some serious potential. It’s a rare 18-year-old who not only has the ambition to become a fake doctor (in both the sense of not having credentials and training, and also because I think naturopathy isn’t backed by any real science) but the skill and wit to somehow secure an office and start a practice. This isn’t a case of some hick sport-humping a manatee or a goofball thinking that throwing an alligator through a drive-through window would be a funny prank, but someone who exemplifies the sort of unorthodox thinking that leads to success that I talked about in my Ignite presentation on Florida Man. What he needs some kind of mentor to take that chutzpah and wherewithal and point them in a more productive direction.

Couldn’t disagree more. This kid is clearly smart, but lacks any sense of humility, responsibility, or sanity. Medicine, of whatever kind, requires these factors in abundance.

Give me a humble, hard working doctor ANY day, over a proto-Shkreli.