The recipe that this article points to no longer exists, but there’s an equally good recipe for Maple Bacon Browned Butter Chocolate Chip Cookies here! 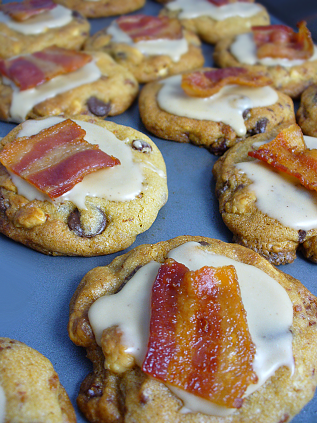 “Muffin”, the author of the blog Ooh, You Tasty Little Things… (a blog that since has been closed), wrote:

This whole thing started the other night when my husband and I were having a conversation about what foods could and could not be made better with the addition of bacon. 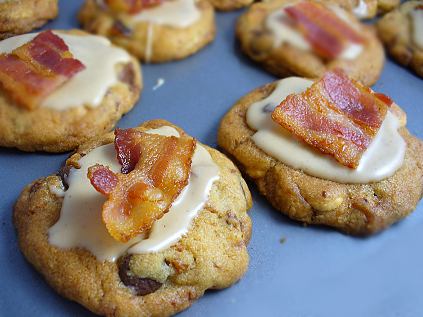 You can see the end result of said conversation in the photos that accompany her article, Bacon Chocolate Chip Cookies with Maple Cinnamon Glaze, some of which are reproduced here. 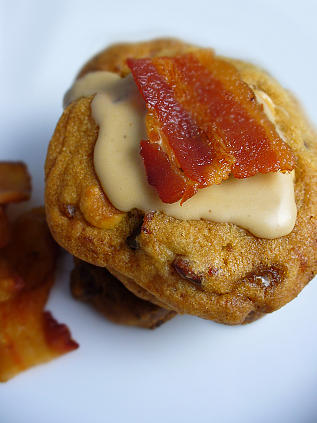 She says they taste good — and why not? She’s not the only person who’s mixed bacon and chocolate: consider the bacon chocolate bar created by Vosges, the gourmet chocolatier and heartily recommended by none other than supersexy celebrity chef Nigella Lawson. 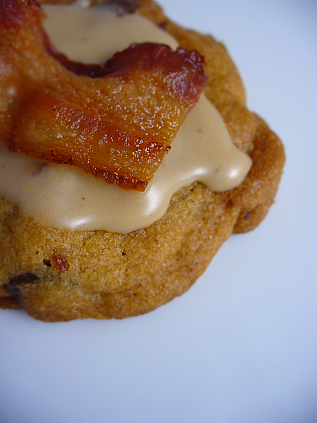 Luckily for those of us with brave culinary spirits, “Muffin” published the recipe for the cookies and the glaze. Who wants to try making a batch of these with me over the Chrismukkah break?

I’d be willing to make them for you however you called Nigella Lawson a “chef.”

I’m not even scared of these cookies. They do pour maple syrup over bacon, so I believe chocolate shouldn’t be that different. We would have to adapt them to my dietary conditions, though.

Guess what I’ll be making to celebrate the end of exams? 😉

The maple is perfect to tie the two together. And chocolate and salty are an excellent combo (think chocolate covered pretzels).

Not so crazy after all, methinks.

[…] For those of you who just cant get enough bacon, I’ve included the link to the story and recipe. Bacon Chocolate Chip Cookies with Maple Cinnamon Glaze The Adventures of Accordion Guy in the 21st … __________________ "Come to the DARKSIDE….We have COOKIES" Every day is a good […]

[…] Bacon is so popular that they are even putting it in cookies. (See for yourself! Bacon chocolate chip cookies) […]

BOOO. The website for the recipe is deader than a doornail. Does anyone have this recipe that they could share?

[…] It’s just so delicious, and apparently, it goes with everything. Today we stumbled across chocolate chip cookies with bacon and maple cinnamon glaze. Now, before you are quick to dismiss, I have to harken back to a maple bacon cupcake I ate a few […]

That blogger’s recipe was so popular that she got her own domain: http://neverbashfulwithbutter.com/food/2008/03/01/experiments-in-deliciousness-bacon-chocolate-chip-cookies-with-maple-cinnamon-glaze/

[…] year, we found, baked and devoured the bacon chocolate chip cookies posted here: Illegal treat. It was an exercise in confectionery bliss I thought would never be matched […]

i’m actually eating Mo’s Bacon Bar by Vosges Haut-Chocolate, and it’s actually a wonderful thing! People used to think salted caramels were absurd and now it’s a huge trend, the Bacon Chocolate trend is just a step further, with the caramel notes in the milk chocolate and the saltiness of bacon with the added sea salt all blend well. So now, I think making it into a cookie is a wonderful idea! Although, I do think I would put bacon bits IN the cookie rather than decorate the cookie with a chunk of bacon.

[…] was during Christmas of 2007 when I was first inspired to bake my own batch of chocolate-chip bacon cookies, after being informed of its existence whilst gaming. As an experimenting cook who would just about […]

[…] I thought I did, but a quick search on Google showed that a lady blogger named “Muffin” had come up with it awhile back.  I was sad until I realized there were no copies of the recipe laying around (her […]

I have to say, that i think this would be a nice blend. maybe people are afraid of taking the traditional cookie and altering it to a more savory, tasty treat… maybe if this was presented a little differently. I don’t know how, mainly because i like this cookie… people, expecially those looking to further their culinary expressions, should be open minded… come on, who would have thought that the artichoke is edible… and tasty to boot! hang in there friends, bacon chocolate chip cookies are ok… really they are.

so i think this looks just so yummy, and im having a class project … and im making it for my group, whats the ethnical background behind this food. ..
but just wondering, is the liquid ontop of the cookie and inbetween the bacon , grease from the baccon, or gravy…? i think you should put some icing sugar on this with a touch of maple syrup it would just top it off.

[…] at our company, and we have a good story and a full belly to boot. Maybe we can get him to make us bacon chocolate chip cookies for his first annual […]

that looks great, i would eat that in a second

[…] know, or not. Frankly, in the middle of this month I somehow smelled some bacon, and, MAN, did that smell […]

[…] know, or not. Frankly, in the middle of this month I somehow smelled some bacon, and, MAN, did that smell […]

ewwwwwww so butters they look gross

[…] sweet and very salty, which definitely threw me off.  but i am no stranger to salty dessert items (these were ubiquitous on my wedding day, par example), so what i think really threw me off was the […]

they look so freaking nasty ewwww

I am going to have to try these!!! YUM!! Bacon is good on everything! I have a bacon cupcake recipe that everyone loves! SO what if they’re fattening.. lol. 🙂

[…] If this music by the Jive Aces doesn’t uplift you, there is always chocolate and bacon. […]

I’ve made this exact recipe, and for all you doubters out there….you’re crazy. They’re amazing. Maria is exactly right–it’s just like when you sop up your extra pancake syrup with your bacon. It’s amazing. In fact, I’m trying to dig up the recipe again to make them for my husband’s birthday!

Wow. Who are you people who look at this and say eww?! These look incredible. The Vosges bacon chocolate bar is good, but not as good as the candied bacon my friend dipped in peanut buttery chocolate goodness. OMG. Setting out to make an apple bacon cake with maple cream cheese frosting tonight, naysayers be damned.

[…] and so those two things are my excuse for this indulgence….not quite same, but amazing! (No bacon involved, you will be glad to know!) There is no double or single cream in this concoction, but you can rest […]

Where is the recipe published?? I cant find it 🙁

Here’s a link to the recipe:

[…] blog still gets a lot of hits for a post from 2007 titled Bacon Chocolate Chip Cookies with Maple Cinnamon Glaze. Unfortunately, the recipe to which I linked has long since vanished, leaving more than a few […]

[…] Bacon goes with dessert like oil goes with calculus—it’s not just that they don’t go together, it’s that combining them doesn’t make any sense. Meat isn’t dessert, it’s what you eat before dessert. Anyone who doesn’t understand that is still being sent to bed early for demanding cookies before finishing their vegetables. […]

[…] Bacon goes with dessert like oil goes with calculus—it’s not customarily that they don’t go together, it’s that mixing them doesn’t make any sense. Meat isn’t dessert, it’s what we eat before dessert. Anyone who doesn’t know that is still being sent to bed early for perfectionist cookies before finishing their vegetables. […]

[…] Bacon goes with dessert like oil goes with calculus—it’s not customarily that they don’t go together, it’s that mixing them doesn’t make any sense. Meat isn’t dessert, it’s what we eat before dessert. Anyone who doesn’t know that is still being sent to bed early for perfectionist cookies before finishing their vegetables. […]