Yup, it’s July 1st, which is the anniversary of the founding of this rather nice country, my home for the past 28 years. I raise a pint of Upper Canada Dark Ale to everyone today. Cheers!

If you choose to go by months, July 1st also marks the start of the second half of the year. Yup, we’re 50% of the way through 2003. The first half had its share of excitement, and I certainly looking forward to what the second half’s got in store.

The New Canada. A multi-part series from the Canadian national newspaper The Globe and Mail on how Canada’s younger generations — many of whom, like myself, are “New Canadians”, are redefining the country. One of the installments is a piece on the cultural salad bar that is Accordion City, where you can get biryani, bulgogi, bouillabaisse, bratwurst and Big Macs, all in the space of a few blocks.

Canadian World Domination. Well, we can dream, can’t we?

Men Without Hats. The people who brought back maypole dancing and midgets to rock videos and gave us all The Safety Dance!

Degrassi Junior High. Low budget, as Canadian as all get-out, corny and cheesy, but yet so addictive. Filmmaker Kevin Smith is a big fan.

And where does the really good kind bud come from these days?

Avalon. What could be geekier than Canadian online comic high school melodrama?

Crazy Go Nuts University. My alma mater, Queen’s University. And yes, I was there for the “Chaos of ’87”. I remember my first job interview out of school — the interviewer asked “So you went to Queen’s, right?”. I answered “Yes,” to which he replied “but you’re sober!!!”

And last but not least, our favourite mutant: 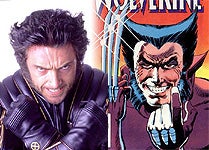