On Friday night, Paul and I went to my friend Amber Joliat’s pumpkin-carving party. It was a fun evening with about two dozen people in attendance, carving pumpkins, drinking wine, eating homemade cookies and seeds taken from the pumpkins and roasted in the oven. I was also the musical entertainment for the evening; that night, I tried two new numbers in the repertoire: AC/DC’s Dirty Deeds Done Dirt Cheap and Cake’s Sheep Go to Heaven. A fun evening all ’round — mucho thanks to Amber and her housemates for having us over!

The crowd at Amber’s. We took up all the space in the living room.

“Okay, Jack, time for your lobotomy!” It’s one of my favourite lines from Calvin and Hobbes.

;). It wasn’t a terribly labour-intensive design, but I had to get mine over with quickly because people were asking me to get on the squeezebox and rock out.

Here’s Paul working on his pumpkin…

…and here’s the end result.

“I feel like Norman Bates in Psycho“. Jenn takes a knife to the Great Pumpkin.

Faster, Pussycat! Kill! Kill! The mottling spot you see on its front was the side that the pumpkin was lying on.

“The X-Men are no match for the Master of Magnetism!” Mark carved himself a nice helmet just like the one Magneto wears in The Uncanny X-Men.

The gallery of jack-o’lanterns in the light. Once we were done carving, we gathered our work along the wall…

…and then killed the lights. This photo doesn’t do the scene any justice; it looked amazing.

Here’s the gallery from another angle.

And here it is from yet another angle.

This is a close-up of the right side of the gallery.

Some of the jack-o’-lanterns, close up:

Here’s the “Great Pumpkin” that Jenn was carving in one the pictures above.

Happiness is a carved pumpkin.

The Phantom of the Opera. He’s scary, but not half as scary as the prospect of sitting thrugh another Andrew Lloyd Webber musical.

Some folks got really ambitious and carved these, using the “level 3” (the most difficult) templates in the jack-o’-lantern book. The results were pretty impressive:

John Wayne. This one took over two hours to finish.

Gilligan! I’m not sure what would make a graphic designer decide that Gilligan would be a good design to have on a jack-o’-lantern, but I have to admit that it’s pretty impressive.

For old times’ sake, I downloaded MacArthur Park with Kazaa Lite, played it, and now it’s stuck in my head. Especially the go-go danceable instrumental break. It’s palying right now, and I’m go-go dancing as I type this. 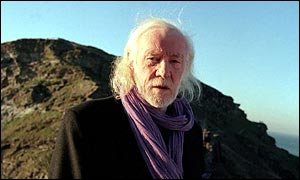 Sir…Richard…Harris! “I want to be bishop….keeeeng….Pope!” He passed away in London this week.

Being Filipino, I have a higher tolerance for disco and musical theatre than what is normally allowed for straight men. So when Camelot came to the O’Keefe Centre (now known as the Hummingbird Centre) in Toronto during the fall of 1985 — a return to the theatre where it was performed for the very first time, twenty-five years earlier, I went willingly. The role of Lancelot was played by its original actor, Robert “Cajun Christmas” Goulet as was King Arthur’s, by none other than Sir Richard Harris. After the show, he gracefully went out into the lobby and autographed souvenir programs, one of which was mine. I’ll have to dig it out of “the memory box”, now a large crate where I keep stuff like that.

The kids know him as Albus Dumbledore, beloved headmaster of Hogwarts Academy in Harry Potter and the Philosopher’s Stone or as Emperor Marcus Aurelius in Gladiator, older filmgoers know him from This Sporting Life, Heroes of Telemark, A Man Called Horse or The Guns of Navarone, but I will remember him for his hit single — that completely bombastic, over-the-top anthem for anyone who’s ever lamented over what-could-have-been: MacArthur Park.

MacArthur Park became a little bit of an in-joke between me and my friends Ryan and George when we worked together at our summer job designing and producing the student directory and daytimer for Queen’s University. We’d been watching the SCTV episode in which Dave Thomas lampooned Richard Harris. “Harris” appears on the music show “Mel’s Rock Pile” and proceeds to do an extended version of the already-long MacArthur Park, getting more exhausted by the second and screaming “somebody get me a bloody towel!” during the upbeat rock bridge. We also enjoyed the SCTV episode in which “Harris” played the title role in “The Man Who Would be King of Popes“. Harris then became our unofficial mascot of sorts, and MacArthur Park was our unofficial anthem — it ended up getting mentioned in the “thank you” section of our the directory and daytimer.

A tip of the hat to you, Mr. Harris — rest in peace. And for those of you old enough to remember MacArthur Park, here are the lyrics, in all their soggy-baked-goods-metaphoric glory:

Music and lyrics by Jimmy Webb

Spring was never waiting for us, girl

It ran one step ahead

As we followed in the dance

Between the parted pages and were pressed

I recall the yellow cotton dress

On the ground around your knees

And the old men playing checkers by the trees

There will be another song for me

For I will sing it

There will be another dream for me

Someone will bring it

I will drink the wine while it is warm

And never let you catch me looking at the sun

And after all the loves of my life

After all the loves of my life

You’ll still be the one

I will have the things that I desire

And my passion flow like rivers through the sky

And after all the loves of my life

After all the loves of my life

I’ll be thinking of you

[The extended “somebody give me a bloody towel!” break — everybody go-go dance!]

If you want the MIDI version, check out this page.

Blogger somehow ate my post and I haven’t got the time to re-type it right now. In the meantime, you might enjoy this photo I just dug up. It’s of my friend, A-list blogger, science fiction author and EFF Outreach Coordinator Cory Doctorow trying on a suit at the San Jose Flea Market just before the end of 2000.

Look out, Billy Hill and the Hillbillies… There’s a new sheriff in town.

The suit really works for him. Cory, have you considered being the front man for a rockabilly band?

Yes, today isn’t the Wednesday closest to the middle of the month, but Kick Ass Karaoke, the most rock-and-roll karaoke night in town is tonight! It’s at the Bovine Sex Club (Queen, about half a block east of Bathurst). Not only will there be karaoke, there’ll also be a Thirsty People of Toronto gathering at the same time!

…among whom is Yours Truly.

Won’t you come out and play?

While flipping thorugh some of the photos in Yahoo News, I found this shot of Charlton Heston and just had to post it.

I’m not sure how convincing he sounds in light of all the sniper activity in Virginia. “Guns don’t kill people, white vans do!”

Two men say they’re Jesus, one of them must be wrong

Me and The Dude. Hey, he turned water into Crown Royal, earning his place in history for the World’s Greatest Party Trick.

I know that the plastic Jesus figures (“with gliding action!”) are the all the rage, but if you’re considering buying me one for my birthday, don’t — I already have one.

I am, after all, a good Catholic boy.

[Thanks to Cory at BoingBoing for the link]