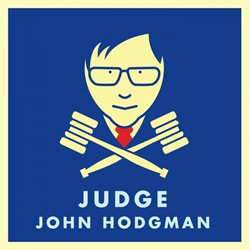 Take your People’s Court, Judge Judy, Judge Mathis, Judge Alex, Judge Joe Brown and all those other TV-based small-claims court judges, and drop them. There’s only one judge whose cases you should follow: Judge John Hodgman and his fair, well-considered rulings on minor pressing issues that people bring to him.

Yes, this is the same John Hodgman as in the author of such books as The Areas of My Expertise, More Information Than You Require and That is All, correspondent on The Daily Show and the “I’m a PC” guy from the old Apple ads. This is his podcast, in which people can bring their disputes to him via Skype, and hilarity ensues.

There are hearings aplenty for courtroom drama aficionados to enjoy. As of this writing, there are 81 podcasts, each one featuring a case that’s a little unusual, but not as “Honey Boo Boo” trashy as the sort you’ll see on similar courts on TV. Judge Hodgman invites the occasional special guest bailiff; Food Network’s Alton “Good Eats” Brown helped out with a mother-daughter dispute about canning preserves, and author Elizabeth “Eat Pray Love” Gilbert is the current guest bailiff, she’s quite witty on the mic.

The most recent case is titled Live Freon or Die, in which a daughter wants her dad to get the air conditioning in his car brought back to working order. They live in Arizona, and she’s worried that the heat poses a danger to him. Her father is part stubborn dad, part MacGyver, and he’d rather use his improvised cooling solutions. How will Judge Hodgman rule? You’ll have to listen to find out.