After watching Star Wars Episode I: The Phantom Menace (the one where we meet Anakin Skywalker), I remarked that in that movie, everybody knows that the Jedi are the powerful, guardians of peace and order in the Republic and wielders of the mysterious power called The Force. But by the time of Star Wars Episode IV: A New Hope (the one where we meet Luke Skywalker), which can’t have taken place more than a mere thirty years later, almost nobody remembers the Jedi and the Force is considered to be myth. I remember joking with my buddies that it would be like someone in the 1970s saying “Hitler wasn’t real!”

Well, as I like to say, the satirist’s job is a hard one these days, because reality keeps one-upping you. I’m not sure how many people think Hitler was a myth, but according to this news story, one quarter of Brits think Winston Churchill was a fictional character.

Also believed to be myths by the Brits surveyed:

Even worse, here are some mythical characters believed to be real by the Brits surveyed:

While some people — such as The View’s most moronic host (and she’s up against some stiff competition) Sherri Shepherd — would argue that this isn’t the sort of knowledge you need, I argue that you need some sort of historical context to understand the news and to vote. I am reminded of the Churchill quote: “The best argument against democracy is a five-minute conversation with the average voter,” a telling quip from one of freedom’s most eloquent defenders.

Click the comic to see it at full size on its original page.

The last one was a success — we had over 50 attend (you can see photos and a quick writeup here) and this one looks like it’s going to be as big a hit. Better still, based on feedback from the attendees, we’re going to delve even deeper into technical matters, because that’s what you asked for!

Several eager Rails developers have asked us about presenting their projects at our Project Nights, and next Tuesday, we’re proud to feature these presentations:

TSOT’s Ruby/Rails Project Night takes place next Tuesday, February 12th at our development office at 151 Bloor Street West (just east of Avenue Road), Suite 1130. Doors will open at 5:30pm with presentations beginning some time between 6 and 6:30. This event is free but space is limited; reserve your spot today by emailing corina.newby@tsotinc.com or joey.devilla@tsotinc.com.

[This article was also posted at Global Nerdy.]

Here’s the agenda as of the time of this writing:

If you were wondering what happened at the last Facebook Garage/FacebookCamp, you can see my notes at:

[This article was also posted on Global Nerdy.]

Click the photo to see the birth announcement on Boing Boing.

Congratulations are in order — Cory just announced on Boing Boing that Alice gave birth to a healthy baby girl! Weighing in at 9 pounds, 6 ounces and bearing these names, in order:

A hearty mazel tov to Cory and Alice, and once again, welcome to the world, Poesy!

From the Tom the Dancing Bug comic, here’s a team-up featuring two superheroes: God-Man and Human-Man…

Click the comic to see it on its original page.

If you’re dreading the commute home in the aftermath of the bad weather all over the country, here’s a little something to keep it all in perspective: Guangzhou train station, during their bad winter weather: 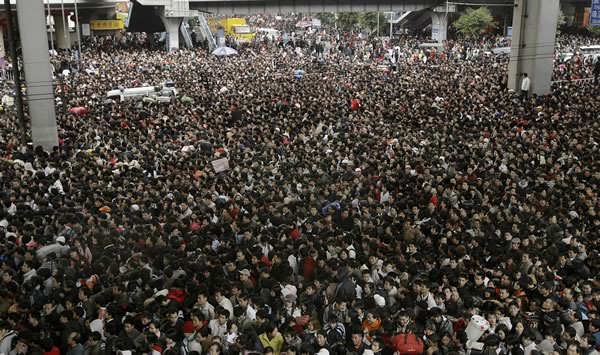 Click the photo to see a much larger version.
Photo courtesy of Miss Fipi Lele.