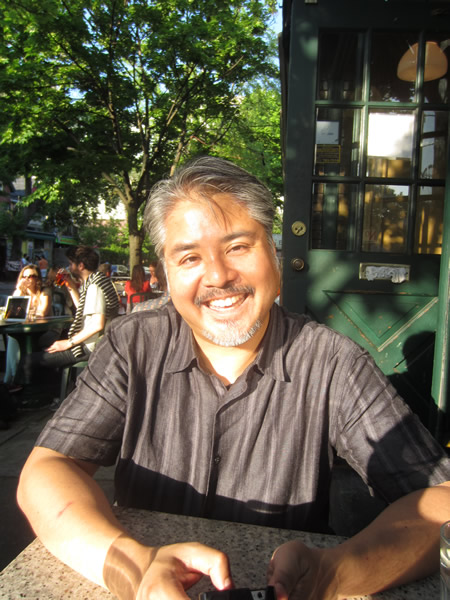 So far, the first week of my “funemployment” — in which I’m taking some time away from the working world to recharge, retool, recalibrate and relax, as well as get a little travel in — has been pretty good. The photo above shows me on the patio of John’s Italian Caffe in Baldwin Village, where I’m dining with…

…Anitra, who was up here for the week for a conference. She’s back home in Tampa, but I’m flying down there tomorrow to be with her for a couple of weeks. She’ll be working during the weekdays, which will free me to get in some decent time at the gym, the pool, learning iOS programming (it may sound weird to non-geeks, but I find programming an enjoyable hobby) and checking out the new synths at the nearby chain music store. 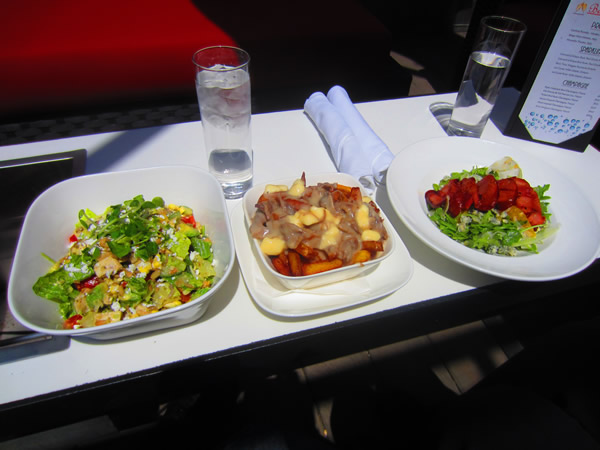 I took Anitra to a number of places in Toronto, including the Boiler House in the Distillery District… 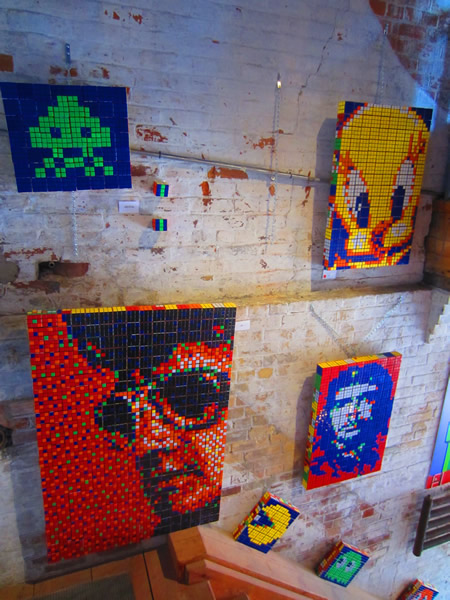 …where we also checked out some of the galleries and shops. 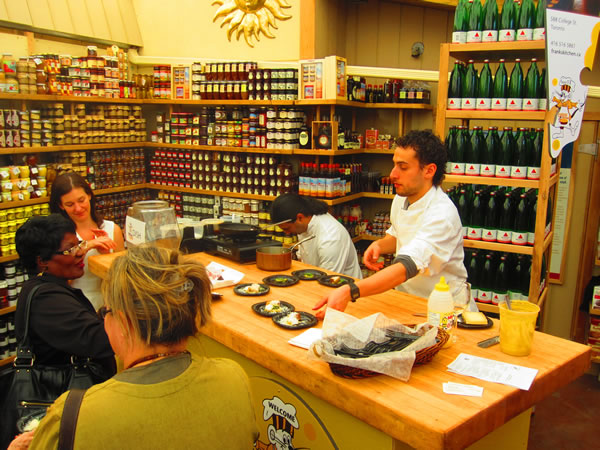 We also went to the Cheese Boutique, who’ve been having guest chefs from local restaurants serve samples of their cooking… 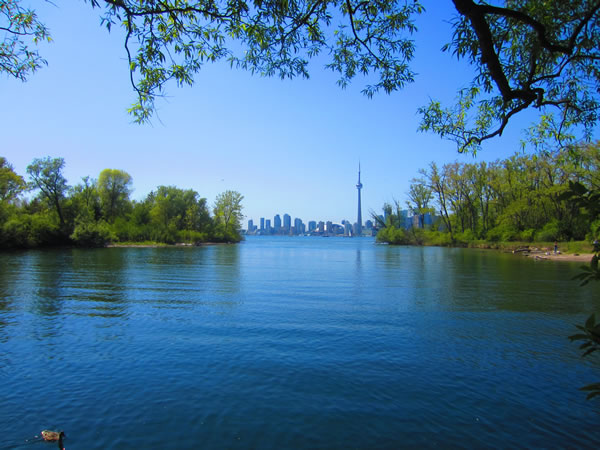 …and we also went out for a picnic on Ward’s Island, then walked to Centre Island to catch a bit of Centreville. We also got to sample Barque in Roncesvalles Village as well as 17 Steps in Bloor West Village.

We’ll be touring around Tampa when I’m there, and I’ll share my photos as I take them. 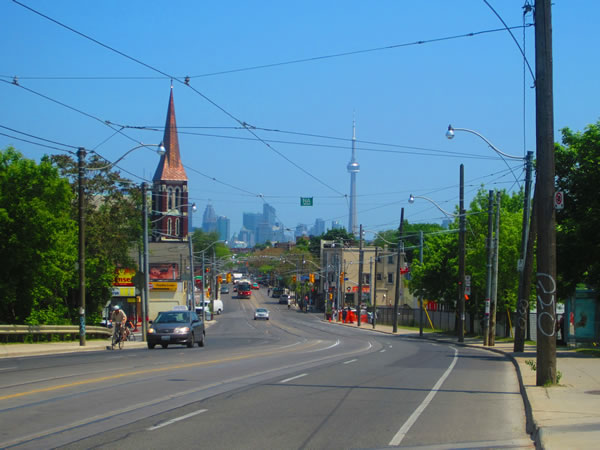 I’ve also been running around on my bike, meeting up with people. Although I have a perfectly functional car (a Honda CR-V that I drive less than 10,000 km a year and whose gas tank I fill once every four to six weeks), I live right by High Park subway station and bicycle year-round. In many cases, especially when traffic is bad or parking is short, it’s often about as fast as using the car or transit, and I get some exercise out of it to boot. I snapped the photo above at the crest of the Dundas Street bridge going towards Lansdowne a couple of days ago. 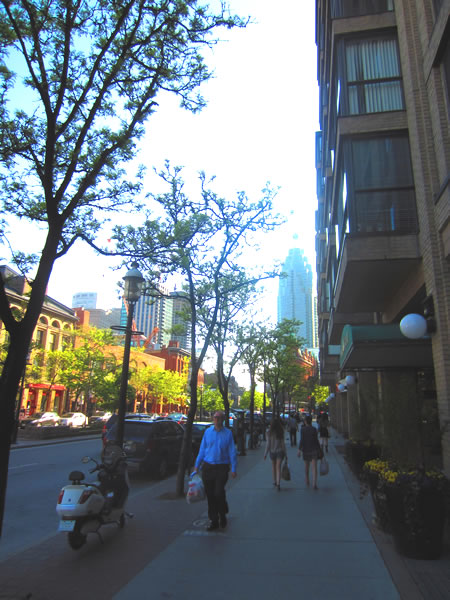 Front Street is always gorgeous in the summer, and I was passing through to get to… 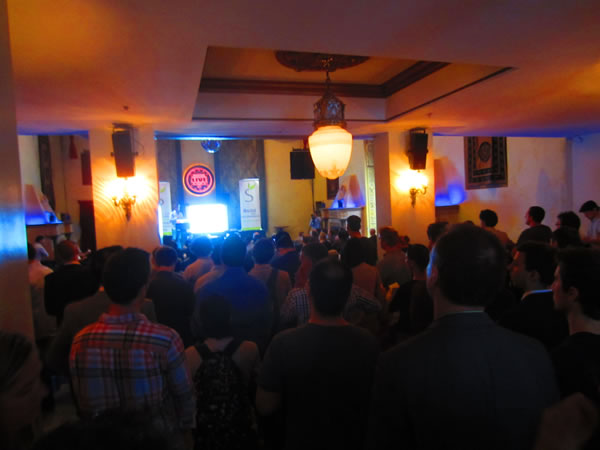 …this month’s Sprout Up, the event for local entrepreneurs and startups. As usual, the Courthouse, Sprout Up’s usual venue, was packed with over 400 people there to catch the presentations from some new startups as well as the guest speaker. I was there to do my usual networking; although I’m on vacation, I’m still making sure that I’m tied into the scene and doing a little hustling for my next gig.

One of the places I got to do some hustling is Soma Chocolatemaker on King near Spadina, where I met with a friend to talk about a potential job opportunity in the fall. 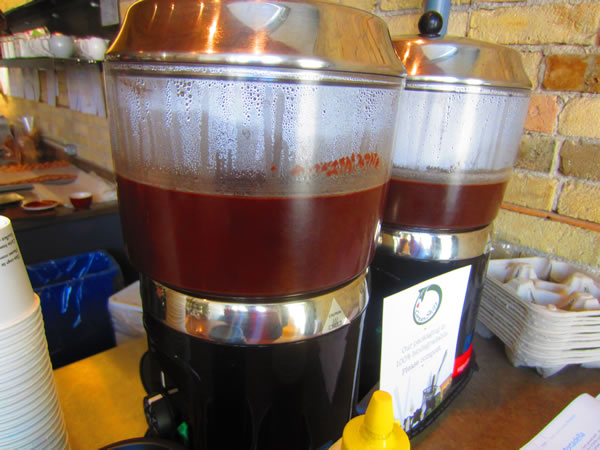 It was good to hear about the opportunity as well as to catch up with my friend, and better still, to do so over a glass of Soma’s iced mayan hot chocolate. That stuff is amazing. 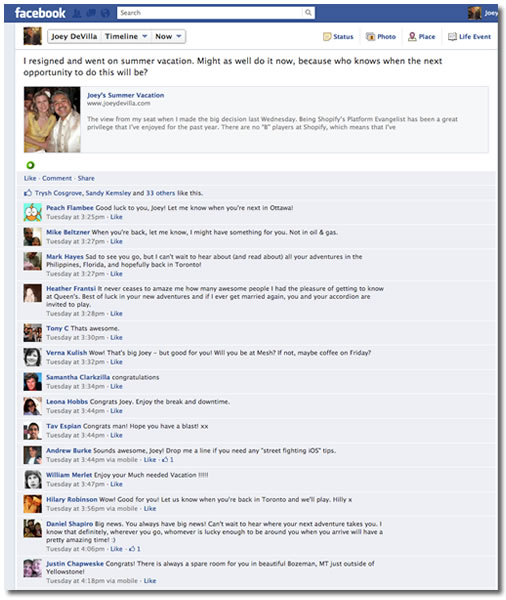 The well-wishes on Facebook and other online places in response to my announcement of going on summer vacation have been amazing. I wasn’t expecting much of a response, especially the “Dude, you’re my hero” sort. I was just lucky enough to have some money socked away, a nice tax refund, a pile of frequent flyer points I’ve been saving for just such an occasion, and some Microsoft stock to sell before it’s too late. My former employer, Shopify, have been nothing but cool and generous about the whole thing. I have neither debt nor kids, my expenses are few and my network and rep are such that I can either find a job or make one when it’s time. I think of what I’m doing as equal parts pragmatic and lucky, not courageous or anything special.

The networking’s been going well. I’ve had a handful of phone conversations with recruiters who’ve contacted me as well as friends and associates who’d heard that I’d be on the job market in the late summer and fall. It’s nice to be wanted, and if you’re looking for a kick-ass tech evangelist who can also code, check out my LinkedIn profile (LinkedIn functions as my resume now) or drop me a line! 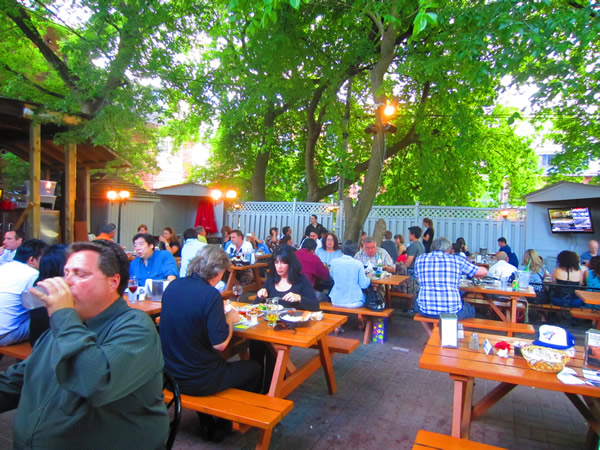 Last night, I had dinner with my friends Maria and Jen at Bairrada on College West. Now that it’s warm, their patio’s open, and it’s one of my favourite places to get a cheap, cheerful and filling meal.

So far, funemployment’s been fun!